Serbia through the eyes of a train traveller (me)

Yesterday the train connection between Belgrade and Sarajevo was re-established, 18 years after being interrupted. This is great news to me, in a very selfish way. Soon I will be moving to Sarajevo and visiting Belgrade often and trains are by far my favourite transport.

It was by train that I first came to Belgrade, in May 2006. When I climbed down from the train, I saw that the station was packed with police. They were looking for Ratko Mladic. In the frontier between Hungary and Serbia, the train had already been searched by military. The idea that I might have travelled with Mladic amused me, absurd as it was. Later my friend Jelena and I tried to guess how he might be disguised, with me imagining Mladic conducting the train himself, while rather saw him dressed as an Hungarian peasant women, sitting quietly next to a bag of potatoes.

This was the 6th of May. Three days earlier, the EU Commission had suspended negotiations with Serbia for a Stabilization and Association Agreement, the first step towards EU accession (I remember watching the news on television while I waited for a connection to Budapest at Milan airport) over the fact that Serbia failed to fulfil its commitment to fully co-operate with the ICTY. On the following days, several police actions were undertaken, including this one at the Belgrade train station. My friend Dusan, who picked me up, grabbed my bag and rushed me out of there, saying that one never knows when thinks may heat up- I though he was joking. And that was my first impression of Serbia.

Some people were arrested, but the operations didn’t convince anyone, a mere show for outsiders. This was Kostunica’s rule. After the assassination of Zoran Djindjic in 2003, Kostunica was very very successful in exploiting the West’s sense of guilt for having put so much pressure for reforms. Presenting himself as a ‘moderate nationalist’, he received international support, and the EU opened, in November 2005, negotiations for the signature of the Stabilization and Association Agreement, despite the fact that the government was making a mockery of Serbia’s obligation to cooperate with the ICTY by replacing the policy of deporting those indicted by a policy of ‘voluntary surrender’.

Less than 2 years latter, I returned to Belgrade by train once again, this time from Zagreb (I went to Belgrade in the year in between, but not by train) . I was on my way to Pristina, where I had the chance to participate in the party of Independence. Back from Pristina, I could observe the frenzy of nationalism and violence to which Kostunica was leading the country. On the night that I left, I had to cross Belgrade from Vracar, where the Temple of Saint Sava is located to the train station. This was the epicentre of the riots following the government-organized ‘Kosovo je Srbija’ rally. The Embassy of the United States had just been arsoned and as  I walked among the crowd, I could see the McDonnalds in Slavija Square being ransacked and vandalized, people being beaten, public property, such as bus stations, rubbish containers, etc, being destroyed, people carrying stolen goods. At a certain moment, I was also threatened by one of the rioters, who saw that I had a camera and wanted to seize it. An older man ordered him to let me go after I said I was spanish. “Let her go, she’s on our side”, he said in English, and he obeyed immediately. The man had been following me and Jelena for a while, we had noticed him already (I was later told that he was most likely from the intelligence services). He was very polite when he asked us what were we doing there. We just said I was there just by chance, while he walked with us until we got to a calmer area.

Finally I got to the train. It was full of rioters, mostly young people who had travelled for free to Belgrade to participate in the rally. In my compartment, there was also an old man with an accordion. When a group of young boys and girls got in, carrying looted goods in plastic bags- Reebok trainers, clothes, wristwatches, cellphones, call cards- they told him to play ‘Tamo Daleko’ and sang with patriotic fervour. The old man was happy to be given such attention. They were 4 boys and 2 girls. One of them, the most bullish, then turned at me and ask me where did I come for. I thought of saying Spain, but then in case I needed to show any documents I would be uncovered. When I said Portugal, two others shouted ‘Cristiano Ronaldo’ and then I felt a bit less insecure. It goes without saying that they were drunk. They generously shared with me their cheap alcohol, something like a brandee, very bad, which I accepted not to upset them. One of the boys sat next to me and began chatting. He was the kind of guy that turns nostalgic when drunk, unlike the bullish, whose aggressiveness was hardly contained by the leader of the group, a quiet guy. I played dumb, an accidental tourist caught in an unfortunate situation. I never gave the slightest indication that I knew (a litlle bit of) Serbian or anything about Serbia, so very quickly the conversation with the ‘nice guy’ shifted to his personal life. I wasn’t scared, just angry to see how a generation had been corrupted by Serb nationalism, first under Milosevic as children, then under Kostunica as adolescents. Not everybody in the train were kids, tough, many were mature men dressed in military-stile camouflage clothing, and there was one totally dressed as chetnik, including the hat and the beard. When the train crossed the frontier the Croatian ticket collector was surprised to find me in the otherwise totally empty train. I’ll never forget the way he looked at me. He just looked and bounced his head and then I felt an enormous relief.

When I returned once again the following July, I was happy to see that something had changed in Belgrade. Serbia had a new government, after  having gone through general elections, which resulted in what I called the defeat of the intimidation strategy of Vojislav Kostunica and the radicals. The prospect of isolation that was offered by the nationalists was rejected  by the voters. The EU played a very important role in supporting democratic change in Serbia. It offered Serbia the Stabilization and Association Agreement and diplomats pushed the Socialist party to join the pro-EU block.

Everything was different in Belgrade. It was Summer, there was a warm environment, a feeling of hope for a new cicle, which was reinforced when, a few days after I left again, Radovan Karadzic was arrested and sent to the Hague. On my way back, I once again took the night train to Zagreb. In the station, Jelena and I were moved by the romantic scene of a very young couple running to each other and kissing. The girl had gone there to say goodbye, but the boy was getting late and she was getting anxious. It was a movie-like scene. 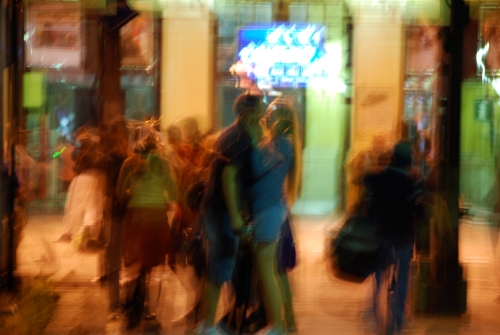 I asked Jelena please when you make a film, you must find a way to include this scene, but then we agreed that it was a unique moment which we were fortunate to witness, ephemeral maybe but deeply emotional. On the train also everything was different. Instead of drunk rioters, in my compartment travelled an old Serb and a Croat in his 30s, who were very keen to explain me that they both spoke the same language, except that one called bread ‘hleb’ and the other ‘kruh’. Only the Croatian ticket collector was the same. He didn’t remember my face, of course, but I could never forget his moustache. I got back from Belgrade that Summer feeling that change was possible, and not only in Serbia. I feel nostalgic when I think of that trip, the warmth of Belgrade’s summer touched me deeply.

When I came back once again in the beginning of Autumn, the real Belgrade was back in place. Changes had happened, no doubt. The question then was would they take roots or would the enemies of a peaceful, democratic Serbia manage to undermine them. And how far would the new holders of power be willing and able to go?

It became very clear to me that there was no political will nor popular support for addressing the core problem of the persistence of nationalism in Serbia. Such problem could only be addressed by facing the past, that is, by looking at Serbia’s role in the destruction of Yugoslavia, because that’s the spring well from where ultra-nationalism drinks nowadays.

Situations like the threats against the Belgrade Pride parade and the murder of Frech citizen Brice Taton by nationalist extremists reveal how fragile are the basis of pro-european Serbia. The State was challenged and failed.

Now the B92 TV report ‘Insider’ reveals how the judiciary repeatedly, systematically failed to deal with the threat of extremist violence by youth groups, mostly organized around football clubs. The journalist who made this investigation, Brankica Stankovic and B92 were then the target of a number of serious threats, including rape and murder threats. Seven people were arrested in connection to these threats, but the fact is that the legitimate authorities of Serbia seem to be unable or unwilling to take vigorous action, restricting itself to reacting to open challenges in incidents that are likely to be repeated.

Nonetheless, Serbia seems is getting closer to EU accession.  Its citizens were granted a visa-free regime for the Schengen area and the Netherlands dropped its veto over the full implementation of the Stabilization and Association Agreement, following a favourable report about Serbia’s cooperation withe the ICTY, despite the fact that Mladic is still to be found.

While Bosnia is immersed in a political deadlock which nobody really knows how to overcome, Serbia seems to be evolving on the right direction, but there are many contradictory signs that indicate how precarious change is in Serbia.

The fact that the connection between Belgrade and Sarajevo was re-established now is one of the many contradictory signs of change in the region. The opening of this rail connection is a sign of hope, because trains bring common people closer. For me, it will be an additional opportunity to sense the pulse of both Serbian and Bosnian society.

The photo on top was taken by my friend Jelena Markovic and originaly published here.