Last Sunday, 27 June, attended the ceremony which marked the 18th anniversary of the Bikavac fire, in the town of Visegrad in Eastern Bosnia. This was a very simple yet moving ceremony, in which family and friends of the victims paid tribute to them in the most dignified way.  I felt very gratified for having had the opportunity to witness such emotional event, which was deeply sad, but also, through the example of dignity and strength revealed by its participants, very inspiring. 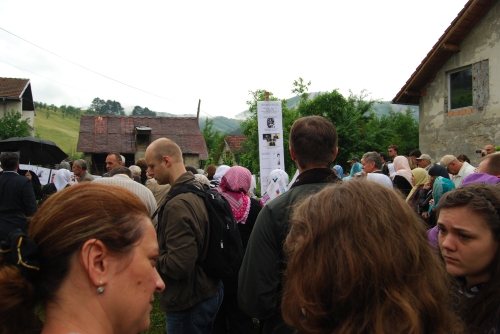 Photo: the arrival at the site of the Bikavac fire.

On the night of 27 June 1992, around 70 persons were locked in a small house on the Bikavac hill, after which the house was set on fire. The crime was meticulously prepared, to make sure that nobody would survive to tell the story. All the exits had been blocked by heavy furniture, and a heavy garage door was placed at the house’s entry. Only one person, Zehra Turjacanin, survived, albeit heavily burnt, by escaping through a narrow fringe between the door and the garage gate, and eluding the surveilance of the armed men, who were busy celebrating Vidovdan by listening to loud nationalistic songs and intoxicating themselves with drugs and alcohol.

Amid widespread indifference and oblivion, a small group of determined people works in order to pursue justice for the victims and keep their memory alive. Only around one hundred persons attended the commemorative ceremony, organized by the Women Victims of War (Zene zrtva rata). As we walked the slope leading to the place where once the house stood, it occurred to me that the number of participants was very close to the number of victims. I couldn’t stop imagining them being gathered in the same place, eighteen years earlier, surrounded by their executioners. When we arrived, a wave of emotion spread, and tears were shed while some of the women covered their heads with a scarves as a sign of respect. Nobody cried, though. Instead, people looked at the improvised exhibition installed for the occasion, showing the names of the victims, depicting the images of some of them, as well as photos of some of the Chetniks who terrorized them and of  Zehra Turjacanin, whose testimony at the ICTY provided crucial evidence for the conviction of the leader of the local para-military unit, Milan Lukic, to life in prison.

No politicians were present, no reporters either, such tragic event not being considered important enough amidst the countless atrocities committed during the war. However, the small number of participants did not diminish in any way the significance of the commemoration In fact, it rather highlighted it, as representative of all those forgotten massacres. Far from being an isolated incident, the Bikavac fire was only one among many crimes committed in the area of Visegrad, as part of a widespread and systematic attack against the civilian population, targeting the Muslim inhabitants, in order to change the demographic structure of the area, that is, to transform it into a exclusively Serb area. Such goal was successfully achieved. Eighteen years later, very few Bosniaks have returned to the municipality of Visegrad, and, I was told, only two or three have returned to the city itself. Of the presence of the Muslims in the city, very few traces remain. One of the mosques destroyed during the was was rebuilt, but on the location of the other, a small garden has been planted, in which the cross-shaped pathways further desecrate what was once a place of worship. Only the Drina river and the magnificent Mehmed pasa Sokolovic Bridge, made famous by Ivo Andric’s book ‘The Bridge on the Drina’, still confer some beauty to the town, in which main square a statue to the Serb fallen soldiers stands, facing the river and its famous bridge in front of the Hotel Visegrad, where Serb fighters ‘heroically’ got drunk before and after executing rows of Muslim civilians on the bridge and throwing their bodies to the Drina. The tribute to the ‘Fallen soldiers’, with which the Bosnian Serbs try to highlight their own suffering stands is striking contrast with the absence of memorials to the real victims of genocide in Visegrad. 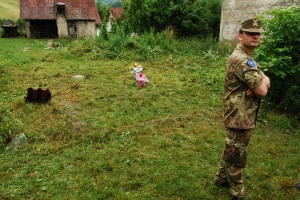 Photo: an Italian soldier of the EU Police Mission observes the participants as they leave the place where the house once stood.

After the fire, what was left of the house in Bikavac was bulldozed and removed to unknown locations, along with any remains of the victims, in order to erase all traces of the crime. The land was then transformed into an improvised waste dump, and as we were standing there, listening to the short speech delivered by Bakira Hasecic, the leader of the ‘Women Victims of War’, and to the prayer pronounced by the local Imam, the silence on the audience was interrupted by the noise of plastic bottles and other rubbish under our feet. As a proof that a house was once there, only one section of the houses’s fence remains, but the organizers marked the four corners of the house with wooden sticks, which allowed me to realize how small it was, and to imagine how packed it was on that tragic night. 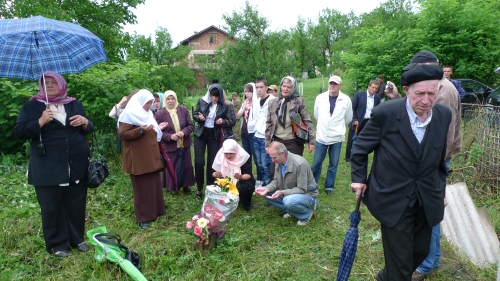 Photo: Esad Tufekcic and other participants engage in a prayer for their loved ones, at the end of the ceremony. Photo by Sven Gunnar Simonsen.

Among the participants on the ceremony, was a man, Esad Tufekcic, who lost his then 28 year old wife Dzehva, his four year old daugter Elmaghter and two year old son Eldar. He spoke to the foreigners present, myself and my friend Sven who came with me, and a few american students. Asked by one of them what did such event mean to him, this man, whose face was the very image of pain and trauma, reminded us that he had lost his entire family, for whose remains he has been searching for in the last eighteen years, and expressed his sorrow and outrage by the fact that the people who committed such atrocity can return to Visegrad and welcome as heroes.

This was a reference to the recent release of Mitar Vasijlevic, a leading member of Milan Lukic’s ‘White Eagles’.  Released from prison in March 2010, after having served ten of the 15 years to which he was condemned by the ICTY, he was greeted in Visegrad by a fanfare and celebrated by hundreds of people (photo here),  a crude reminder of the long road yet to be travelled before we can even start talking of reconciliation in Bosnia. The feeling that justice has not been served in Visegrad is further highlighted by the fact that, while in his own trial, the prosecution failed to proof beyond reasonable doubt his involvement in the Bikavac massacre, as well as on a similar crime, committed one week earlier on Pionirska Street, which resulted in the death of 59 persons, such proof was subsequently established in the context of the trial of Milan Lukic, who in 20 July 2009 was condemned to life in prison. Other participants in this crime remain unpunished, as do many others in the countless crimes of the Bosnian genocide.

As was stated in the judgement of Milan and Sredoje Lukic (pag. 239),

“In the all too long, sad and wretched history of man’s inhumanity to man, the Pionirska street and Bikavac fires must rank high. At the close of the 20th century, a century marked by war and bloodshed on a colossal scale, these horrific events remain imprinted on the memory for the viciousness of the incendiary attack, for the obvious premeditation and calculation that defined it, for the sheer callousness, monstrosity and brutality of herding, trapping and locking the victims in the two houses, thereby rendering them helpless in the ensuing inferno and for the degree of pain and suffering inflicted on the victims as they were burnt alive.”

One of the most beautiful regions in Europe, Eastern Bosnia is now a desolated region, burdened by the weight of genocide and economic stagnation, the two faces of the legacy of the war. What was achieved with all these crimes? Endless suffering for the victims and his relatives and friends, and moral corruption among those who fail to feel outraged by such atrocities, and a whole society whose future remains hijacked by those few which the war and its aftermath brought wealth and power.