Christmas in Sarajevo as a Catholic holiday.

I have been living in Bosnia and Herzegovina for  the last six months. Since I first arrived here in June, I have travelled a lot, both in the country and in the neighbouring countries. This was a very intense period, and as the holiday season approached I found myself with no energy left to travel away for Christmas, and decided to spend this period in Sarajevo instead. That proved to be a very fortunate decision, not so much because of the airport chaos in Europe, but because it gave me the chance to be part of a very special environment in a city which, despite being now overwhelming populated by Muslims, is nevertheless determined to preserve its multicultural character and traditions. It also allowed me to better understand how religion as a cultural phenomenon works in Bosnia as a marker of difference among the Bosnians.

When I first told one of my closest friends in Sarajevo that instead of joining my family I would would spend Christmas alone in Sarajevo, he immediately offered to accompany me to the Midnight mass in one of Sarajevo’s Catholic churches. What I first thought was an act of hospitality based on friendship turned out to be a very old practice among the Muslims of Sarajevo. “We always go, every year. In Sarajevo everyone goes to the ‘ponocka’, not only the Catholics.” And his mother added that it has always been like that, even during communist rule.

When I asked around, this was confirmed by everyone. People even seemed to be surprised when I replied that I had never heard of such a thing, believers of a different religion celebrating in this way a holiday that they acknowledge not to belong to their own religious practice. For the Muslims with whom I spoke this is an established tradition that has become part of their own identity, while not at all diminishing their attachment and respect to their own religious tradition.

I chose to go to the Midnight mass at the Cathedral, in the centre of Sarajevo. When I got there, around 22h 30, the doors were still closed, but there was already a small crowd outside waiting. Much more people were walking along the main streets, between Bascarcija and the Marshall Tito street, killing time before the mass. The crowd gathered in front of the doors was composed by Catholics, who were keen on getting a good seat and rather anxious for the doors to open, although the night was not particularly cold, while the apparently more relaxed attitude of the Muslims reflected in fact their concern not to deprive the Catholics of the best available places, as that would not be a respectful thing to do.

When the doors finally opened I was very lucky to find myself a seat. In a matter of a few minutes the church was totally full, with people standing even on the 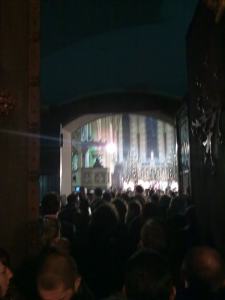 main way, something I had never seen before, and many people remained outside, and followed the mass thanks to the loudspeakers installed at the square. On the front, in the seats reserved for representatives of other religions, the presence of Orthodox priests indicated that this tradition of attending the ‘Ponocka’ was not exclusive to the Muslims.  The Cardinal Vinko Pujic, who celebrated the mass, on his homily acknowledged and made a note of appreciation for the presence of non-Catholics at the Mass, before addressing the Catholics, in a speech that extorted them to recognise Bosnia as their homeland, concluding that ‘Ova je nasa zemlja’. That this is also the land of the Catholics (that is of the Bosnian Croats) is also stated by the non-Catholics, nowadays mostly Muslims, that attend the midnight mass.

This is not to suggest that the coexistence between Bosniaks and Croats is devoid of tension in Sarajevo. Tensions do exist, and are revealed, on the one hand,  by the Croats’ anxiety about becoming a residual minority in the city, and on the other by some Bosniaks’ resentment against the system of quotas in access to public jobs which grants the Croats a larger share than their demographic proportion. I will deal with these tensions in another post, but for now it is important to highlight that in any healthy society the coexistence among different groups (whatever may be the criteria of differentiation) is marked by occasional conflicts and very often by persistent latent tensions. The level of cohesion of a society is most accurately measured not by the presence of absence of tension, but by the consensual mechanisms that help manage difference on people’s every day lives. One of such mechanisms has just been described in this post.

The ‘Ponocka’ is lived by the inhabitants of Sarajevo as an event that is part of their identity as Sarajevans, an identity that transcends the barrier of religion, while at the same time framing Christmas as a specifically Catholic commemoration (I heard a foreign of protestant faith complaining about feeling discriminated by the fact that before 24th December people greet only the believers of Catholic faith).

The Christmas holiday season is marked marked in Sarajevo by a surprisingly successful juxtaposition of different traditions that goes beyond the Catholic dimension. However, the coexistence of different traditions is not always devoid of controversy. The main focus of this controversy has been, in recent years, the figure of Djeda Mraza, a controversy which I will elaborate upon on my next post, the second of a series of three posts dedicated to the holiday season in Sarajevo.

(A photographic coverage of this event can be seen here)

13 responses to “Christmas in Sarajevo”