Russians against russian imperialism: a protest against the war in Georgia.

From Russia, I have received an email with these photos of a protest against the Russian aggression on Georgia. It was organized a few days after the beginning of the war .

I am publishing them today, with an excerpt of the email:

“I think that if we (I mean we in Russia and you in Europe) had stopped  the war in Chechnya and punished the war criminal there wouldn’t have been this war.”

“Don’t believe in the justice of war”

“War not in my name”

I have always admired people who are not afraid of standing alone for what they think is right. 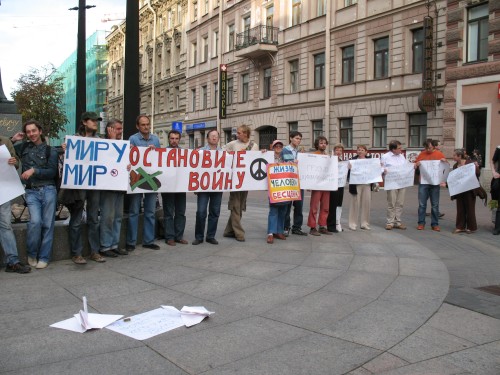 I believe that, in the end, Russian nationalism and Putin imperialistic ambitions are self-defeating, but still, until then, what much more damage can we expect?

Russia recognized today the independence of Abkazia and South Ossetia.

While negotiations for the settlement of the status of Kosovo were going on, the serbian government based its strategy strategy in the belief that Russia would prevent the independence. Instead of adopting a constructive approach, the serbian government preferred to use the tactic of delay. To delay any settlement and to prolong the negotiations for as long as possible was its tactics, while on the ground it was working towards the reinforcement of parallel structures on the north.

The international community played Serbia’s game for a while, in part because of its lack of will to take decisions, in part because of the bluff that the loss of the cradle of the nation would bring the radicals to power. After a while the bluff didn’t work anymore, and the states supporters of the independence forced Serbia to show its cards. The independence was declared, the centre of Belgrade was vandalized and looted by angry patriots who decided to take revenge by destroying public property and stealing from their co-citizens. Finally, the general elections results confirmed that the bluff had failed. The nationalists lost their last opportunity to seize power in Serbia, and were then betrayed by SPS and even by their allies within BIA.

The new government chose to adopt a new approach, certainly a more clever one, by asking the UN General Assembly to ask the Internacional Court of Justice for an Advisory Opinion regarding the legality of the declaration of Independence and the recognition by other states. Although such move would be devoided of legal consequences, because an advisory opinion is not legally binding, Serbia was thus trying to:

1- Create a situation where those states who haven’t yet recognized Kosovo as an independent state would opt to wait and see, thus making it more difficult for Kosovo to be integrated in the international community, and in particular to prevent its access to international organizations;

2- Present itself as an unselfish defender of International Law, and not merely as a state who is fighting for its national interests. regarding this issue, we might ask, what would serbia do if the ICJ decided that there had been no violation of International Law? Would Serbia then recognize Kosova and find a modus vivendi that allowed the kosovar serbs not to be used as mere instruments of Belgrade? Or would it simply disregard the decision, with the argument that it is not biding anyway???

I very much prefer that Serbia acts to defend its interests and even the International Law by using the international juridical mechanisms at its disposal rather than by burning foreign embassies ( which is, by the way, a violation of International Law), and I am very happy to see that some changes are occurring in Serbia that may be crucial for the establishment of an open society and the marginalization of nationalism.

But the fact is that, regarding Kosova, there was merely a change in tactics, not a change in policy or even strategy. In this sense, Serbia received today a major blow by its major ally, Russia.

By deciding to recognize the independence of Abkazia and South Ossetia, Russia put Serbia in a position where, not only it will be unable to keep claiming to be on the side of those who want to protect the international system by defending its territorial integrity, but also on a situation where a favorable decision of the ICJ will further highlight the scandlous violation of International Law by Russia.

Such move by Russia is hardly surprising. In February 2006, Putin said:

“We need common principles to find a fair solution to these problems for the benefit of all people living in conflict-stricken territories…. If people believe that Kosovo can be granted full independence, why then should we deny it to Abkhazia and South Ossetia?” he said.

“I am not speaking about how Russia will act. However, we know that Turkey, for instance, has recognized the Republic of Northern Cyprus,” Putin added. “I do not want to say that Russia will immediately recognize Abkhazia and South Ossetia as independent states, but such precedent does exist.”

While those pushing for the independence of Kosova argued that it would be a unique case, a consequence of the desintegration of Yugoslavia and of the major Human Rights violations that the kosovo albanians endured, Putin’s Russia was arguing for the establishment of ‘common principles’.

Thanks to the logic of appeasement that dominated the european democracies, Russia’s position was taken as a serious argument made by a big power that was interested not to upset the current balance of the International System. The argument which the appeasers used was that, if Russia accepted to back Kosova’s independence, that would have serious consequences in its internal order, bearing in mind cases such as Chechenia. It amazes me that anyone could take such argument seriously, because we all know how Russia has dealt with Chechenia.

In fact, what Russia did was to make a self-fulfilling prophecy. While refusing to accept Kosovo as a unique case, it became the first state to take advantage of the ‘precedent’ that Russia itself was claiming it would be set by the Independence of Kosova.

It is interesting to note that Russia was careful enough to use the same line or arguments that NATO used to legitimize the intervention in Kosovo in 1999. We could then ask why then Russia did not act to prevent the genocide of the Chechen people. Leaving that ‘detail’ aside, a major difference emerged, which can help us identify the difference between the arguments based on the duty to protect and humanitarian intervention and the Munich-style line of arguing. NATO did not intervene to protect the citizens of its member states. Neither did those member states distributed passports among the kosovo albanians so that they might latter claim that they wer national citizens of those states

We can thus conclude that, as so many times before, Russia once again used Serbia for its own purposes, and then betrayed it. This is what happens when you have unreliable friends.

On the other hand, we may ask, while Serbia was indeed betrayed, what about the greater-serbian nationalists? This step by Russia favours them, well, it might favour them more if they were in power, if the outcome of the last elections had been slightly different. But we must remember that these people think on a long-term scale. This means that all efforts to reverse the results of genocide in Bosnia must be made, because time works for those seeking partition. Greater-serbian ‘patriots’ don’t mind loosing Kosovo if that means that in twenty years they may grab ‘republika srpska’. Anyway, in their minds, they see the independence of Kosovo as only temporary. It’s sacrifice will be avenged one day, so those sick paranoids think.

However, the fact that they lack the means to accomplish their dream for now represents an unique opportunity to promote the opening of the reversal of the effects of ‘ethnic cleansing’ in Bosnia and to support the progressive forces in Serbia in such a way that, in twenty years time the sick paranoid greater-serbian nationalist will have nothing better to do than to talk for themselves. But this requires a vigour on the part of european democrats that seems to be lacking. In a way, this crisis is the product ofa wider crisis of values within the EU states too, which is reflected in the lack of commitment to support freedom and justice whenever that comes with the slightest cost.

Haw the West been hypnotised by Russia?

Fears that Crimea could be the next flashpoint for conflict with Russia.

War in Georgia: journalists under attack

Although I had no intention to post anything on my blog before the end of the month, the images I just saw on TV on my lunch break while I was washing the dishes reminded me of this photo that I took in Sarajevo last year.

Here on GLOBAL VOICES you can know more on the attacks on journalists in Georgia by russian forces. There is a comment to this entry that is worth mentioning:

“””I’m sorry but these journalists do NOT need to be there! It’s a war zone, what do they think would happen…duuuhhhh!”””

The problem is, if nobody was willing to take the risk to go there, can we possibly ever come close to the true? Is not that the reason why russian forces are targeting journalists? How much cynical can one be?

I am sorry that for the sake of self-discipline I cannot allow myself to go much further on the questions regarding the war in Georgia, there are promises to keep (to myself) and deadlines to meet… (not that my opinion would have any importance).

So, to those readers who may eventually come here, I would like to recommend:

I share with both bloggers the essential arguments that they present, especially in what comes to the lack of commitment on the part of Europe to defend its values and its readiness to make compromises, an attitude cannot but that remind us of how easy it is to indulge in ‘appeasement’ .

Journalists killed in the conflict: